I have recently been taking a closer look at twitter.   I know a lot of people use it but what i have come to see is that a lot of companies use it as well.     This made me start to wonder how if it would be possible to do some analysis on twitter posts that my company makes.   I find it a lot easier to wright down my thoughts so that’s really all this post is going to be, my working though how to turn Twitter Feed data into a SSAS cube that can be used to analyse twitter tweet exposure and with luck predict how best to tweet.   I have created a SSIS Connection manager and Dataflow Task to query data out of Twitter.     So if you are wondering how i’m doing this well there you have it.

What we want to find out

What are the kinds of things we would want to analysis?   The possibility must be pretty limited don’t you think?   We are really only talking about tweets here.    Then i started to really think about it.

Is there an optimal time for the company to tweet?   When we tweet when do we actually get re-tweets?   Are most of our followers in one timezone or another?   If we tweet at a specific time are we more apt to get more followers and re-tweets.

The reach of a tweet will be the potential number of twitter users that see the company’s tweet.  This will have to be calculated based upon how many people are following the company, as well as any mentions and hash-tags used in the tweet.   Re-tweets will also effect the potential exposure of a tweet.

One of things we want to do is make sure that our company’s tweets reach the widest possible number of twitter users.       One way of doing this will be to determine who are our broadcasters.     The company may have 100 twitter users following them but most of them are probably just listeners people that may or may not read your tweets and do nothing more.    Broadcasters are the ones we are really after.   A broadcaster will re-tweet or comment on the company’s tweets.   This will in turn keep the tweet active and ensure that we reach more users.    If we can identify who our broadcasters are we can be sure to @mention them in tweets to insure that our tweets reach a bigger audience.

If we scan the broadcasters tweets we can tell how many times they have tweeted or re-tweeted using the same hash tag we used in our tweet, or maybe any of our previous tweets.    This should tell us if this broadcaster is apt to have followers that will be part of our target audience.       A broadcaster who often tweets in our same area of interest should be more valuable then one that tweets outside our target area.

Once we have this information can we use it to make predictions before we tweet.    So that we are sure to add a mention of our broadcasters when valid and add Hash-tags when needed.    As well as something simple as knowing what time of day is best to tweet.

What is the ramifications of this?

Update:  When the data is reloaded the amount allocated to twitterfriendcount will be the same.    If someone friends CompanyX after the tweet is made if its over two weeks its not going to be worth counting as an exposure, the chances they will see it are low because there feed will be displaying newer posts.

Update:  The re-tweet has a first level exposure being that of the RetweetUsersFriendCount  should be added to the first level of exposure of the original parent tweet?  I think so.

Would it be possible to determine what time of day / day of the week is the best time to Tweet in order to get re-tweets.

Lets look at the Twitter API  GET statuses/user_timeline  method can only return up to 3,200 of a user’s most recent Tweets.   So if i query CompanyX Screen Name

When i run that it will return up to the last 3,200 tweets, but i also think its tweets in the two weeks older tweets don’t appear to be returned.   What i found very nice here is that when the tweet returns it gives me a retweet_count and a Favorite_count.   These counts appear to be the counts at the time of the query.    So if i add a new row to my tweet fact table with the datetime that i ran the query i should be able to see when the tweet was re-tweeted.       I will be able to track re-tweets and favorites for each of my Company’s tweets.   There is a limit to how often you can hit the Twitter API but IMO it shouldn’t be an issue i can run this every 5 minutes and be OK.

The Twitter API returns so much information i’m finding it hard to decide what information to extract. 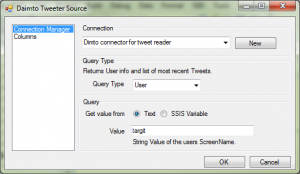 The task is very basic so far.   I have query type set up so that i can select if its a tweet, re-tweet, mention, search or User that I want to query.    But there is so much information that comes back from each of these queries.   A tweet returns the same user information as for example a user.  Do i want to extract that as well probably as i have the data why not save it to the pipeline.    I had the idea of maybe adding some way of selecting which columns i want to extract in the Source but then i will have to add another variable to the task and test for it while i build output columns and when i write the data.   I think that would really be to much work.    I’m leaning towards just outputting everything i think i might use, then i can just ignore it in the destination task.  The only draw back to ignoring the extra output columns in the destination task will be that SSIS will give a warning that some of the output columns aren’t being used.   The output columns not being used warning from SSIS isn’t an issue in my opinion I think i can live with it.

Another idea that could be fun is to write the JSon to an output column to.   But then if i want to read that column from the database i’m going to have to go back to my SSIS JSon Source task that I gave up on…..

Now i have a clear idea of what data i can get out of the twitter api, and i have a general idea of what i can analyse with that data.   I think its time to start to design my data model.