The Dimension you should now be using is called DEVICE_CATEGORY  which simply returns desktop, tablet or mobile. 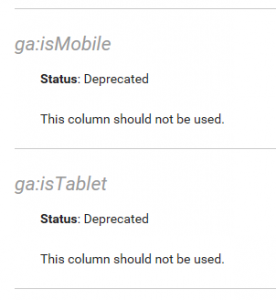 Matthew Cohoon from the Google Analytics development team just sent out notification that it will be removed very soon.   This will probably be your final warning if you are using IS_MOBILE or IS_TABLET you need to move to DEVICE_CATEGORY.

Hello,
The filter fields IS_MOBILE and IS_TABLET have been deprecated since November 5, 2014 and API support for these fields will be removed in the coming weeks.
If you have not done so already you should migrate your code to use DEVICE_CATEGORY.

Insert, update and patch request which set filter fields to use IS_MOBILE and IS_TABLET will return an error.
-Matt

– You may now resume your Google Analytics API development –